Explanations on the inventory procedure

Legal basis of the inventory sampling

The inventory sampling is, according to §241 Paragraph 1 of the German Commercial Code (HGB), an inventory simplification procedure approved since January 1, 1977 to replace the full inventory at the end of the year with recognised mathematical-statistical procedures. A distinction is made between extrapolation procedures using stratification and the sequential test.

The Institute of Auditors (IDW) published a detailed set of rules in 1981 and the Working Group for Economic Administration (AWV) also published supplementary explanations, to which we refer in our explanations.

“When drawing up the inventory, the stock of assets may also be determined by type, quantity and value using recognised mathematical-statistical methods on the basis of random samples. The procedure must comply with the principles of proper accounting. The informative value of the inventory drawn up in this way must be equivalent to the informative value of an inventory drawn up on the basis of a physical inventory.

This paragraph first of all allows inventory sampling. However, the following conditions are imposed for this:

Permissibility of an inventory sampling in other countries

Simplified inventory procedures are also recognized by the Code of Obligations OR 9581 in Switzerland and the Corporate Code §192 para. 4 UGB in Austria.

In companies in Eastern European countries, the use of inventory sampling is currently only possible if the accounting is carried out in the home countries Germany, Austria or Switzerland.

In all other countries of the EU clarification and coordination with the auditors and/or the tax authorities is required.

Regularity of an inventory sampling

In addition to the above-mentioned generally applicable legal principles and the recommendations of the IDW for carrying out a physical inventory – and in particular an inventory sampling – organizational measures must also be taken to ensure the correctness of these transactions.

Determination of the population

According to (IDW, 1981, p. 63): “Warehouses with inventory management systems of varying reliability should be treated as separate inventory populations”. It should be noted here that (IDW, 1981, p. 63f) “the individual elements may only differ from each other with regard to the characteristic value to be examined”. In any case, a clear delimitation of the population must be made before the inventory sampling is applied.

In order to exclude particularly high and particularly low values from the inventory sampling and thus reduce the risk of the physical inventory, a full inventory is carried out for the border areas. This includes, on the one hand, all physical inventory items without a target quantity and, on the other hand, the 5% most valuable items, which in most warehouses make up approximately 50% of the warehouse. In this way we meet the requirement defined in (IDW, 1981, p. 69): “In general, due to the “warehouse phenomenon”, a full inventory of 3 to 5% of the warehouse items will be sufficient to cover 45 to 50% of the total value of the warehouse collective”.

The randomness of the sample is also important in this context, since (IDW, 1981, p. 65) “only then can the rules of probability calculation be applied when evaluating the sample information.”

The mathematical-statistical sampling procedures generally assume a theoretical distribution model. The mathematical-statistical statement is then only correct if the underlying distribution model is fulfilled when the inventory is calculated on a sample basis. Therefore, you must check whether the requirements for the procedure used are met both before drawing the sample and after evaluating the sample. A documented structural analysis of the population and the sample can provide valuable information for this purpose. The procedures […] usually require the model of normal distribution ” (IDW, 1981, p. 67)

With regard to the total value, this must be determined with a confidence level of 95% except for a deviation of 1%. 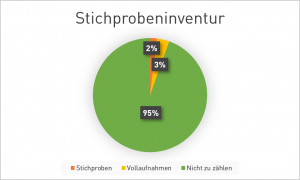 According to the Arbeitsgemeinschaft für wirtschaftliche Verwaltung e.V. (AWV, 1978, p. 20), 2% of the total size of 𝑁 is also regarded as the minimum for the size of the sample 𝑛: “For the size of the sample n from the items which are taken and evaluated by random sampling […] the principle of minimum [sic] for n from N 2% of the items normally applies for safety reasons.”

“Due to the extrapolation of the results obtained by the random sample, increased demands must be made on the recording work. The physical recording should therefore be planned, carried out and monitored with particular care”. (IDW, 1981, P. 62). Always full recordings should be made (IDW, 1981, p. 63):

Validity of the sampling procedure

If the actual values deviate too much from the book values, i.e. if the inventory reliability is too low, the inventory must be discarded even if the total value is permissible. The physical inventory must also be rejected if there is a deviation greater than 3% with a probability of 95%. (IDW, 1981, p. 72f).

Regularity of the sequential test

Sequential tests are suitable for warehouses where the accuracy is very high. The sample size ideally corresponds to the minimum sample quantity (depending on parameters – usually 35 items), independent of the total quantity of stock items. If there are deviations from the target quantity, additional samples must be taken and the sample quantity is increased. You should note this, since the effort involved is theoretically unlimited. Therefore, in an unfavorable situation, this can be higher than the effort required for a full inventory.